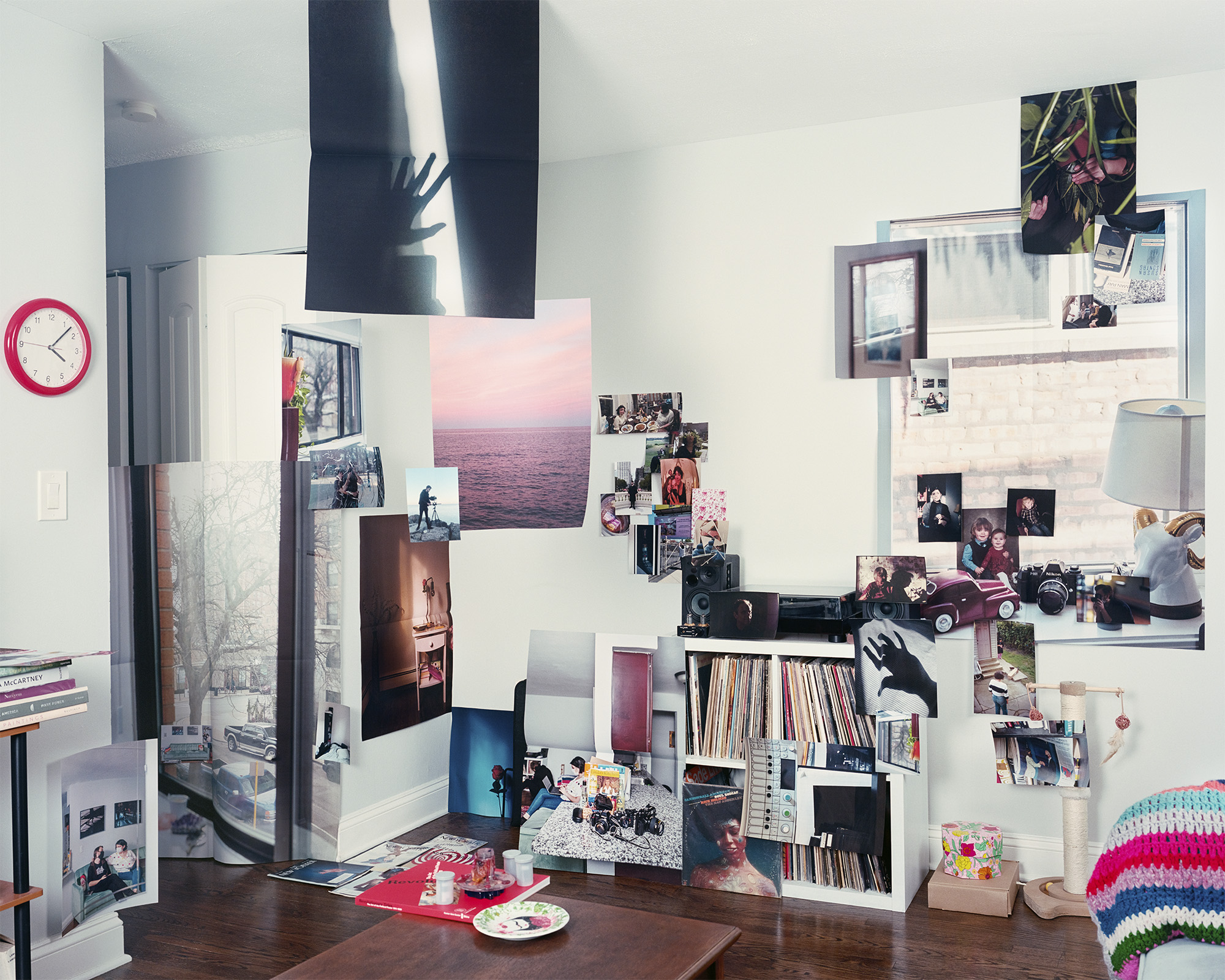 For many immigrants, the home could never be private and secure. In my ongoing project “Resident Aliens,” I find participants who hold different visa statuses in the United States. Upon invitation, I photograph their homes and personal belongings, and then print these images out in addition to my subjects’ personal photo archives. These prints are installed back into their space as temporary installations and additionally documented as photographs.

My performative actions with participants are not only an integral social practice in representing their complex identities and histories, but it’s also a negotiation of power and assumed stereotypes. As a “foreigner,” entering their “territory,” I transform their temporary states of being into installations and preserve the constructions as photographs. The project presents immigrants’ intimately nuanced experiences within their homes and in the US at large. These convergences of spaces and times invite the viewer to enter into spaces of fluidity rather than fixed perspectives. They mobilize the viewer’s gaze, imagination, and care, defying strict definitions.

It is from my own experience and the accumulation of similar stories from my friends that drove me to start “Resident Aliens”. The creation and the use of fear psychologically control us. A resident alien, who is required to pay the same tax as a citizen, may not only need to struggle for assimilation in the public space but also cannot see the home as a safe haven. We are not citizens, and our homes are temporary. Under the systematic oppression, to a certain degree, staying at home could be a house arrest: we either leave to struggle for assimilation or stay in worrying about the shift of immigration policy and foreign relations. For many immigrants, the home could never be private and secure. This perpetually contradictory and temporary state is why I want to photograph people in their homes. Under Trump’s shifting immigration policies, many people were in a constant state of uncertainty. These constructions of state power perpetually classify immigrants as potential subjects of criminality. The pandemic even adds more difficulties to many people I photographed.

Through collaboration and conversation, “Resident Aliens” presents the complicated conditions immigrants experience in the U.S. I want to ask: In this interconnected world, how do we redefine citizenship and the legality of a person?

Guanyu Xu’s photographic interventions offer an exploration of his complex personal history and identity; born and raised in China, Xu moved to the US in 2014. His work bridges the gap between the personal and political, highlighting the disparities and connections between the two nations, in which his intersectional experience of the US meets his conservative familial experience of China.

Gaotai is the first international art center and contemporary art gallery in Xinjiang, China. As a social enterprise, Gaotai aims to promote cross-regional and cross-cultural dialogue between local and international artists through major exhibitions, public forums, and other social events.

Founded by Xing Musa Ma in 2019, who was born and grew up in Xinjiang and has previously studied and worked in Bejing, Dubai, Geneva and NYC. As a member of Schwarzman Scholars, Musa hosts a master degree in global affairs from Tsinghua University.

Gaotai currently represents artists from both China and regions along the ancient silk road, features works revolve around environmental, cultural, and gender concerns.